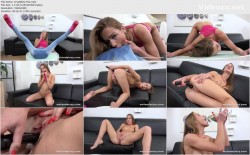 720
26:21
Description:
Alexis Crystal's long awaited return to Wet and Pissy is finally here. She makes a leisurely introduction, pacing herself for what soon turns into a hot pissing medley. She doesn't give us too much of a jean wetting, but she makes up for that moments later. After she's bare from waist to toes, Alexa sets up a doggie style leg in the air position. It only lasts of few seconds, but that's only because Alexa isn't concerned about making it last, but the volume of output. She shifts the direction of her heavy stream and she smiles with joy when she is done. Her plentiful piss lays on top of the round seat she started off in, allowing her to soak her hair and pink top. She takes an interest in a black toy that eventually becomes the vessel to her next pee. She climaxes with the toy causing her to shoot upwards with some good intensity. Her most powerful piss comes towards the end as she gets on her hands and knees with a large goblet beneath her. There's hardly a pause in the action once she gets going. It's an impressive piss, both in duration and power, evident by the amount she captures in the goblet.
Watch online
4 / 0
Comments (0)
Share
Get link to download Complaint
widget here
HTML link
BB link for forums
Direct link
Come Back To Bed
VIPissy