Drenched From Head To Toe 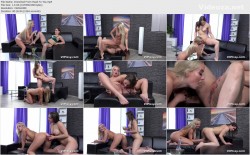 1080
26:04
Description:
Gorgeous European babes Victoria Pure and Barbara Bieber are on the couch in lingerie and are in the mood for some kinky fun! they kiss and decide at the same time to catch their respective pee streams in glasses which are placed on the coffee table in the lounge! Barbara fills her a little quicker than Victoria but both glasses end up overflowing and these pissing lesbians give themselves a taste of piss drinking as they swallow down a few mouthfuls of pee. Barbara lays back on the couch and Victoria pours her pee over her hot body and helps her strip from her panties. Barbara then does the same, soaking Victoria's pink lace panties before these hotties give each other some immense pleasure! Victoria rides Barbara's face and enjoys getting her pussy licked. Barbara then turns over and naughty Victoria gives her a golden shower, washing her hair with another stream of her warm piss! Victoria then fingers Barbara's pussy and while bending over on all fours, she gets drenched in piss too! These babes take turns to lick each others pussies some more and inbetween piss play, they share a jelly dildo! Both of these pissing pornstars end up completely soaked in piss!
Watch online
3 / 0
Comments (0)
Share
Download Complaint
widget here
HTML link
BB link for forums
Direct link
DollFaceMonica - Daddys girl squirts and pees
Other