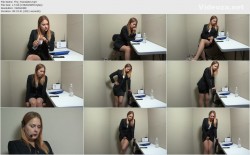 1080
33:41
Description:
Vika is a translator at the United Nations. It's not a job where she can just not show up, and when she is translating the words of a speaker in real time, she can't stop to take a break. On this occasion, Vika is running late and does not even have time to visit the bathroom before starting work. She dashes into her booth and puts on her headset just as the first non-English-speaking orator begins his speech. She has a little discomfort around her abdomen but it is not serious, and Vika feels she will be fine for at least the first talk... unless it turns out to be a very long one. About ten minutes in, Vika really starts to feel the pressure on her bladder and fidgets as she translates. This situation grows worse much faster than she anticipated, and soon she is really squirming, almost putting her hand up her skirt to hold herself. Another ten minutes and Vika is absolutely bursting. She stands to ease some of the pressure on her very full bladder, and is forced to resort to thrusting her hand between her thighs and pushing against her urethra. Her voice starts to shake and occasionally break with the strain of holding her pee, but she simply cannot leave to run to the bathroom. Vika's translating becomes increasingly disjointed as she fights an unbearable urge to pee, right up until the moment she can't hold it and finally loses control. Even then, she presses her fingers hard against her crotch in an effort to stem the flow, but it's no good. Pee jets out and pushes past her fingers, running down her legs as she does her best to retain some degree of composure and continue translating. There is a brief scene at the end where Vika breaks character and shows the backs of her wet legs, and asks if she missed anything. Quite the contrary, her performance throughout was magnificent, which is impressing considering that she was busting to pee when she started.
Watch online
15 / 3
Comments (0)
Share
Download Complaint
widget here
HTML link
BB link for forums
Direct link
Battle of the Bladders
Bound2Burst

1080
17:56
Comments 0
Adult content - access restricted
Vids.Rip are strictly limited to adults of over 18 years of age (or the age of majority in the individual’s jurisdiction). Please confirm you’re of legal age, and if you’re not – please leave the site.